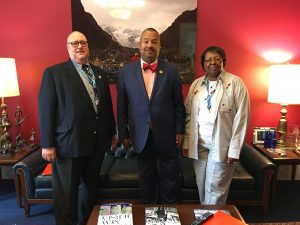 For the first time in more than two decades, the issue will be looked at from the federal level. Along with nurses throughout the nation, NJSNA has been at the forefront, advocating for the funding since 2016.

“This appropriation will help everyone involved in health care really understand the impact gun violence, especially these mass shootings we are unfortunately seeing more and more of, have on the system as a whole,” said Kate Gillespie, RN, MBA, NE-BC, New Jersey State Nurses Association (NJSNA) president. “Nurses work with gun violence victims from the moment they are brought in for treatment until they are discharged from care, which could be years after the incident. This most certainly has an impact on the health care system with the allocation of resources and funding.”

The new spending plan, approved by the House on December 17, 2019, includes a $12.5 million provision for the Centers for Disease Control (CDC) and $12.5 million for the National Institutes of Health to conduct federal research into gun violence. This would be the first time since the Dickey Amendment was passed in 1996 that the CDC will have funded for this research.

“We’re on the other side of the gun violence coin,” said Dr. Benjamin Evans, DD, DNP, RN, APN, immediate past president NJSNA, who says that gun violence is a public health emergency. “The side from which we come is the public health issue. In the CDC regulations, there is a prohibition to collect epidemiological data and we are in support of the CDC being able to collect evidence. None of us go in and practice healthcare without supportive evidence.”

Federal legislators agreed. “You get the end result of this violence and you have to try and put lives back together and make sure people survive,” agreed U.S. Rep. Donald Payne, Jr. (D-10), during a meeting with NJSNA officials in his office in 2016 after returning from spending the night on the House floor after the mass shooting at the Orlando-based Pulse nightclub in June 2016. 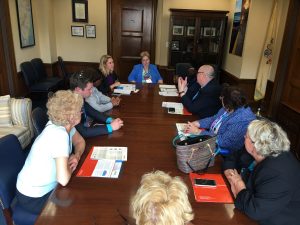 “The more gun violence we have, the more you (nurses) are going to have to deal with on the back end,” said Ashley Eden, Senator Cory Booker’s (D) senior education and health policy advisor during a 2016 meeting with NJSNA representatives in Washington, D.C.

“As nurses, we deal with the fallout from these events as we treat the victims and their families. Our time with them is not brief, as we look at them holistically,” Evans added. “After the flesh wounds have healed, we are left with the mental health issues that take years, if ever, to overcome. Many are left suffering with post-traumatic stress disorder, constant depression, anxiety or other mental illnesses that require lengthy treatments. This is a stressor on our health care system that seems to be forgotten, but is a burden on taxpayers and insurance companies, victims and families.”

NJSNA has been very vocal about the effort. In the days after the Pulse shooting, NJSNA representatives joined hundreds of fellow nurses from around the nation to advocate for research funding on Capitol Hill and nurses continue to speak about the importance of the funding every time they visit.

NJSNA representatives have joined elected officials at rallies and press conferences with federal lawmakers about the issue.

“As healthcare providers, we need data in order to help the communities we live in,” Norma Rodgers, BSN, RN, CCRA, past NJSNA president, has said. “We need that data to put programs in place to make sure people are healing as a whole—it’s not only the victim, it’s the family and the community they live in.”

Rodgers was recognized for her work on this issue

“As healthcare providers, we need to figure out the root cause of these incidents,” Evans previously said. “Just labeling someone as ‘crazy’ or mentally ill is not the answer and only serves to continue the stigma on people who are truly mentally ill. In order to help the communities we live in, we need that data to understand why these incidents keep happening—is it terrorism, is it radicalism or is it truly a mental defect?” 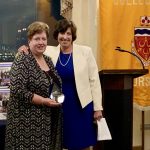