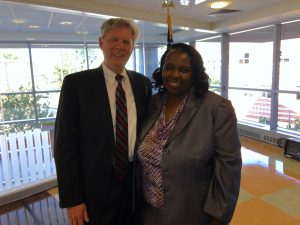 TRENTON, N.J.—Sept. 19, 2016—Physicians, along with Congressman Frank Pallone (D-6), joined the New Jersey State Nurses Association (NJSNA)’s clarion call to lift the federal ban that prevents the Centers for Disease Control and Prevention (CDC) from studying the impact of gun violence on healthcare.

“One thing we would like to see happen is the removal of language that bans the CDC from doing a study and research on how gun violence is a public health crisis and how it’s impacting the healthcare system,” said Norma Rodgers, BSN, RN, CCRA, NJSNA president. “As healthcare providers, we need data in order to help the communities we live in. We need that data to put programs in place to make sure people are healing as a whole—it’s not only the victim, it’s the family and the community they live in.”

Medical professionals from many areas of practice were in attendance as the Congressman listened to them discuss the need for scientific research into the impact of gun violence on healthcare at an event at Robert Wood Johnson University Hospital on Friday.

“I don’t know how many of you saw the Trenton Times from (Sept. 15), but six people got shot in 12 minutes in Trenton on (Sept. 13),” said Puthenmadam Radhakrishnan, MD, MPH, FAAP, a Trenton pediatrician and secretary of the American Academy of Pediatrics, New Jersey Chapter. “The way to get around a problem is to understand the problem. We pride ourselves as Americans that we really look into (a problem) and research it and educate ourselves and then come up with a solution. It’s not that we just find something happening and jump into it without understanding what the situation is. If we are going to handicap the CDC and tell them you can’t look into this and educate us about this and you can’t tell us what’s happening across the country, what good is it? We need to understand (gun violence) as a public health issue, not just an issue of violence. We need to deal with it as a community, as providers and as educators.”

“To put it in a public health context…no one addresses the war we have going on on our streets every day,” said Dr. Rajan Gupta, director of the Acute Care Surgery Fellowship Program and medical director of the Level 1 Trauma Center at Robert Wood Johnson University Hospital. “As a trauma center we have very little ability to do systems-based research and start looking at the distribution of trauma centers, the distribution of guns based on population density and so on…our ability to do this in a systematic and scientific way is extremely limited. Whatever bans we can lift and get some federal funding for this, perhaps, 25 years later we can have an impact.” 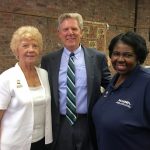 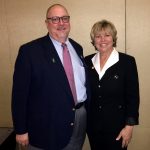 I Aspire to be the Person My Dog Believes I Am: Civility and Incivility in the WorkplaceNews