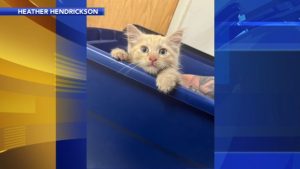 TRENTON, New Jersey (WPVI) — A tiny cat and at least one of his nine lives were spared Sunday night as hero nurses and EMTs in Trenton, New Jersey dropped everything to help.

It was the shift change at Capital Health Regional Medical Center when a nurse heard faint squeaks and meows coming from the sewer in the back of the hospital ambulance bay.

It took about 15 people – trauma nurses, EMTs, technicians and security officers – two hours to open the grate, jump down and rescue the scared cat. They lured him out with cat food and turkey.

Heather Hendrickson, a trauma nurse, even wrapped the kitty up like a newborn in a swaddle as she lifted him to a waiting nurse practitioner, Celeste Shamma.

The cat is male and his new name is “Trent” after Trenton — the city where his story turned around for the better.

And of course, there’s a happy ending.

Trent now lives with a registered nurse and her two kids.

Hendrickson says this was not her first time rescuing an animal. She once saved an injured squirrel on the hospital grounds too.

(This story originally appeared in 6ABC.com.)

Nurse: Thank You to Those Who Love Us
Important Update from the ANA
Social Distancing and Administrative Order Complia...
Quick Links
Upcoming Events 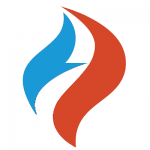 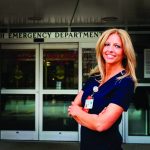 How to Benefit from Pursuing a Career in NursingNurses Weekly