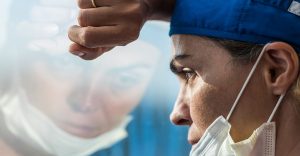 “How do you ever truly recover from seeing so much death?” It’s a question hospital officials, nurses and health experts are mulling as COVID-19 cases in New Jersey continue to surge.

“They continue to show that the second wave of the coronavirus is no longer something off in the future. It is coming, and it is coming now,” Gov. Phil Murphy said recently. “We have been seeing the numbers of new cases grow exponentially across the past several weeks, and along with that, the numbers of patients being treated in our hospitals has similarly been on the rise.”

The soaring caseload will put only more strain on emotionally exhausted nurses.

In May, the World Health Organization issued a report detailing the pandemic’s impact on mental health, highlighting health care workers as a population of concern. Not only are these workers witnessing so much death, the report said, but they are experiencing heightened levels of anxiety from fears of contracting the virus and bringing it home to their families.

“There have been reports of suicide attempts and suicide by health-care workers,” the report stated. No agency keeps statistics on how many health care workers have died by suicide.

The anxiety was compounded when these workers lost their usual stress reducers—the elliptical at the gym, happy hour with friends, the escape offered by a movie theater. Months later, it’s still hard to enjoy these diversions. And the current uncertainty only makes it worse as cases once again mount, although they remain far below the peak of 8,000-plus hospitalizations in April.

“Dealing with the unknown leads to a lot of anxiety,” said Dr. Chantal Brazeau, a psychiatrist and chief wellness officer at Rutgers Biomedical and Health Sciences. “There’s a bit less unknown for the second surge since we have learned, thankfully, from the first. Yet there are still some unknowns that we face.”

Frontline health care workers, Brazeau said, may still feel the repercussions of the first surge, which is a significant concern.

“I think a lot of our nurses—some realize it and some don’t—that they do have post-traumatic stress disorder,” said Sheryl Mount, a nurse of 35 years at Virtua Memorial Hospital in Mount Holly. “I can hear it in some of the things they’re saying to me. Some people are saying, ‘I want a different job’ or ‘I can’t take any more of this.’”

Some nurses won’t experience symptoms associated with PTSD until they’re back in the same stress-inducing environment. However, health care workers are resilient and can prevail through difficult situations, said Brazeau, the Rutgers psychiatrist. 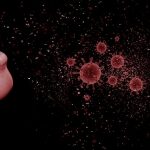 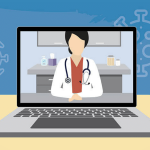