For travel nurses, jobs at home can't come close to pay they get on the road | | New Jersey State Nurses Association

For travel nurses, jobs at home can’t come close to pay they get on the road 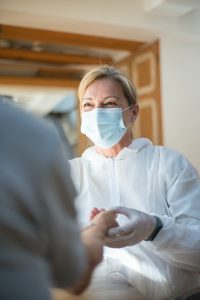 Nursing is a second career and a calling for Sara Dean of Mt. Juliet, Tenn. Dean loved her work at Ascension Saint Thomas Hospital. But then the pandemic hit and she saw how much nurses were getting paid to travel — as much as $10,000 a week.

“That’s a life-changing number. That’s a number that helps you pay off debt, move out of your grandma’s basement or whatever,” Dean, 38, says. “I’m not saying we were struggling. We were a two-income household. But we made ends meet.”

So she took a leave from her hospital job and signed her first three-month contract to go to New Mexico. Her immediate family came with her; her boyfriend could work remotely and her daughter was in virtual school. And when not working, they enjoyed exploring the desert on dirt bikes.

Dean eventually quit her job at home as the money got better and better following COVID hotspots from New Mexico to Maryland to rural Alabama. At one point, Dean’s overtime rate was more than $200 an hour, and she was working 60 hours a week saving the lives of COVID patients.

But after nearly two years, it was really cheerleading that brought them home.

On a recent weekday afternoon, Dean yelled up the stairs to her 12-year-old, Harper, while blending a protein shake. They were on their way out the door to offseason tumbling practice. Harper was working to perfect her back handspring before next season.

“I didn’t really have that many friends,” Harper explained about her desire to come home. “I miss it so much being able to be surrounded by different people all the time.”

The money was previously unimaginable. But there came a point where being uprooted wasn’t worth the sacrifice. Dean says Harper is the ultimate boss.

“She’s the one that says, ‘No more traveling…I want to go home,'” Dean says. “But that also puts me in a bind.”

The pandemic has proven just how valuable highly-trained nurses are.

Hospitals are still paying several times their normal wages to traveling nurses filling in staffing gaps. And turnover is still increasing, with the highest rates in the southeast with roughly one-in-four RNs leaving annually.

But many hospitals won’t hire local travelers, even though they’re hurting for nurses. They want those RNs to accept full-time positions. And full-time pay, while marginally higher, doesn’t come close to the more than $120 an hour that travelers make.

She’s been applying at Nashville area hospitals that are still employing hundreds of travelers and holding out for a more acceptable offer.

Hospitals have been exploring ways to get out of relying so much on staffing agencies, who the American Hospital Association has formally accused of price gouging during the pandemic. The AHA has requested that the Federal Trade Commission investigate, though an FTC spokesperson said there has been no inquiry.

Vivian Health is an online marketplace for travel nursing jobs and tracks pay rates across the country. The San Francisco-based tech firm also is assisting hospitals that are trying to move away from their reliance on temporary staffing. And that will require paying full-timers more, said CEO Parth Bhakta.

“You’re caught kind of between a rock and a hard place,” he says. “I think ultimately health systems need to figure out how to retain their workers more and ultimately, probably, have to pay and incentivize their existing staff more.”

The full-time incentives are building. Some hospitals are trying out temporary positions that essentially allow a nurse to work like a traveler without having to leave town. Bonuses have also become the norm for new hires in some parts of the country.

“We are actually seeing a very, very good labor market for nurses with upwards of $15,000 to $20,000 sign-on bonuses for nurses almost anywhere you look around this Nashville area,” says Julie Hamm, president of the Tennessee Nurses Association.

Still, the average pay bump last year for full-time nurses was only marginally more than usual nationwide at roughly 4%. And when a nurse has gotten used to making $8,000 to $10,000 a week, a one-time bonus of $20,000 doesn’t sound quite so generous, says Sara Dean.

Which is why she and other pandemic travelers face such a difficult transition.

With money in the bank from months on the road, Dean can be a little more choosy about her next job. And she’s making the most of her downtime — from spending Christmas with her daughter in New York City to cheering on her preteen at cheer practice.

Meanwhile, she’s been trying out something entirely different — working part time at a wellness spa near her house that offers rejuvenating IVs. Beyond how to pull back their nurses from traveling, hospitals are facing burnout like they’ve never seen. An estimated half million nurses are expected to leave the bedside entirely this year.

“It is refreshing to do preventative health,” Dean said. “I have done nothing but death and dying for two years.”

(This story originally appeared in NPR.org.) 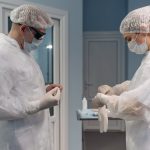 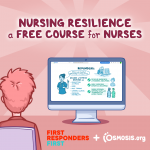