With nursing burnout at an all-time high nationwide, the American Nurses Association is looking at solutions to provide support — one of which is through a free burnout prevention program for all members.

The ANA will offer the Nurse Burnout Prevention Program from SE Healthcare, a data analytics company that provides healthcare improvement tools, to its entire membership for 2023, according to a Jan. 19 news release from the ANA. To gauge early adoption of the solution, the ANA initially rolled out a free fourth month trial, which saw interest from 7,000 registrants.

Of those registered who were surveyed about their experience after, 52 percent of nurses who participated in SE Healthcare’s program said it did help them reduce burnout, and 95 percent requested the ANA make it a permanent benefit of its membership services, according to the news release.

The strong early engagement is what led the ANA to decide to offer the benefit to its entire 4 million membership base for free.

“Whether a nurse is doing great or whether they’re struggling, they’re all having to fend off a lot of real-world issues between staffing and other issues in the workplace, daily. It’s a really tough job,”  Steve Fox, ANA’s vice president of membership and constituent relations, told Becker’s. “Because of that, as a membership organization, we want to provide assistance. We think that by offering it as the burnout prevention program, we’re able to get both audiences: those who are great and those who are struggling.”

As part of its programming through SE Healthcare, all ANA members have 24/7 access to bite-sized coaching videos that focus on solutions to challenges nurses face, as well as a library of peer-reviewed resources. After the trial period, 86 percent of nurses who used the resource reported that they actually implemented a strategy from the coaching series, according to the press release.

The program also includes 25 continuing nursing education credits. During the trial period, Mr. Fox noted that a collective 10,000 CNE hours were earned, further demonstrating the demand for this type of solution.

“One of the unique aspects of this burnout prevention program — which is offered as a series of short, quick videos — is that CNE credits are also offered as an extra incentive,” Mr. Fox said. “Obviously, addressing and preventing burnout is in and of itself important, but because those taking advantage of the tool also get CNE credits, it is just a little extra incentive to do so — it is kind of like the sugar that makes the medicine go down.”

In addition to the burnout prevention programming, this year the ANA is aiming to heavily focus on mental health initiatives and resources. One key goal of the association is to understand and break through the stigma that surrounds mental health issues for nurses.

“Having a service that nobody takes advantage of does not solve the problem,” Mr. Fox said. “Breaking the stigma is something that we’re finding is a big part of the mental health solution and finding ways to convince people to take advantage of the services. Building that is one thing, but right now we’re focused on building it and they will come. It does require us doing additional work to overcome that inherent resistance.”

Mr. Fox said the ANA also recently launched a benefit in partnership with the online arts and crafts platform Craftsy. ANA members can take advantage of a free one-year subscription.

“There is documented evidence that hobbies and crafts can help the stress level of people as they find a way to kind of go deep into something that they enjoy doing, and we want them to lean into that,” Mr. Fox said. 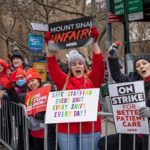