The Case for More Nurse CEOs in Healthcare Administration 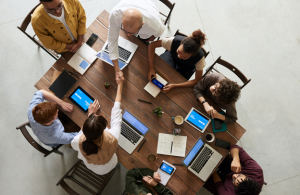 A record number of nurses say they are considering leaving the healthcare industry altogether after two years of working through the pandemic. That has left healthcare CEOs and administrators scrambling to fill open positions while keeping the nurses they already have.

As the national nursing shortage gains momentum, experts say hiring more nurse CEOs could be the solution these companies are looking for. CEOs with nursing experience tend to be rare in the industry, but they are often better positioned to meet the needs of their fellow nurses.

Nancy Howell Agee, MSN, BSN, started out as a surgical nurse at Carilion Clinic in Roanoke, VA before taking over as CEO in 2011.

“We’re still unicorns in healthcare administration,” she said. Agee added that she hasn’t seen an increase in the number of nurse CEOs since she assumed the position over 10 years ago.

“It may even be fewer … because of mergers and acquisitions and the changing industry,” she said, noting that nurse CEOs have historically run smaller healthcare facilities.

There is little data on the number of nurse CEOs across the country. The American Organization for Nursing Leadership says it doesn’t track the number of facility leaders with nursing experience.

A recent analysis of the top healthcare companies and facilities in the country found that just two have CEOs with nursing backgrounds: Johnese Spisso, RN, president of UCLA Health and CEO of the UCLA Hospital System; and Regina Cunningham, PhD, RN, CEO of the Hospital of the University of Pennsylvania in Philadelphia.

Gender may play a role as well. Even though around 76% of all healthcare workers and 87% of registered nurses identify as female, women account for just 15% of industry CEOs.

Hospital and company boards typically appoint CEOs, but there aren’t a lot of nurses on these boards to advocate for nurses in leadership roles. Data from the American Hospital Association shows that just 5% of hospital board members were nurses in 2017.

“Nurses are not always given a seat at the table,” said Dr. Loressa Cole, DNP, RN, CEO of the American Nurses Association Enterprise. She says the industry hasn’t changed all that much over the years.

“We’ve really not made much progress in that regard, even though the American Hospital Association itself says that there is significant value to having nurses on boards,” she said.

Board members with nursing experience can help illustrate the benefits of having a nurse in a position of power.

“A lot of boards are filled with people with strong financial backgrounds and strategic backgrounds, and it doesn’t seem natural that the boards begin to look for a nurse as a CEO,” Agee added.

Cole believes that hospitals need to change the way they view and value nurses in order for these organizational changes to take root. She says that many facilities tend to keep nurses in the field instead of promoting them to leadership positions.

“Strong nursing leaders really have one track, which inevitably leads to being a chief nursing officer,” Dr. Cole said. “I think it’s really up to seasoned nurse leaders to not only demonstrate the talent, skills and aptitude, but to really dispel myths that there is only one lane into the C-suite for nurses in this country.”

“I think nurses go into nursing because of their passion and their concern and care for patients and improving the health of their communities, which of course is the same thing that a CEO would want. But most don’t see themselves in that role,” Agee said. “There’s a sense that the skills you need — whether they are financial skills or data analytics, political skills, etc. — all of that is not exactly how nurses have traditionally viewed their talents.”

Nurse CEOs have experience working and providing care at the bedside, which can inform the way they run the hospital. They can use this knowledge to improve the patient experience.

“Year after year, the Gallup organization has determined nurses are the most trusted profession in the U.S., and really that comes from having super honed listening skills,” Dr. Cole said. “We are also accustomed to working well with teams and have innate talent to lead by example and to bring strong [human resources] skills to the table. Nurses simply know how to work with other people.”

“Typically, senior nursing leaders, nurse executives, are overseeing at least half of the workforce, so they do understand budgeting and financial impact of inefficiencies,” Dr. Cole said. “They understand how variation in processes ultimately breaks down the system and ends up costing money, and they absolutely understand customer dissatisfaction and what is satisfying to patients and families we serve.”

As one of the few nurse CEOs in the healthcare industry, Johnese Spisso, RN, president of UCLA Health and CEO of the UCLA Hospital System, believes that her experience as a nurse helped her get the position she has today.

“People felt that I understood the needs of patients and families but also the needs of the staff and everyone on the team, and a lot of that came from working as a registered nurse earlier in my career,” Spisso said.

“An understanding of not only the role of nursing, but the role of respiratory therapies, social work, pharmacy, nutrition, physicians is really pivotal to delivering best care and is really how those teams work together,” she added. “And I think having experience on the front lines of nursing and also coming up through the ranks in nursing really gave me broader visibility to that.”

Agee added that hiring more nurse CEOs can help the industry transition through this difficult time.

“It’s important for a CEO to have that deep understanding and appreciation for that very human work of healthcare,” Ms. Agee said. “What I call the magic or sacred moment between a caregiver and a patient. The nurse brings that to their core.”