Patients and nurses in New Jersey could be adversely affected by the resignation of Dorothy Carolina, PhD, RN from the position of executive director of the New Jersey Board of Nursing (NJBON).

Dr. Carolina resigned just 13 months after being named to the position. Why is this disturbing? People move on all the time. 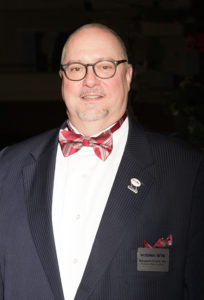 The NJBON is the watchdog protecting patients by overseeing all the nurses of New Jersey. It issues all nursing licenses, deals with complaints and has disciplinary power, which is essential to protect patients and ensuring the best care. It is overseen by state’s Division of Consumer Affairs.

NJBON oversees the practice of the state’s 143,500 registered nurses, advanced practice nurses (APN) and licensed practical nurses; it oversees 80,000 certified home health aides. It also supervises all educational programs for the above professionals and paraprofessionals. In addition, each month the NJBON acts on approximately 250 disciplinary cases-situations that are investigated, analyzed by board staff and reviewed by the volunteer board members prior to action.  That’s an incredible workload.

I believe Dr. Carolina resigned her position for several reasons including the following:

As not only a faculty member in a leading nursing program at a university, but as an active APN with my own practice, I continually hear of delays and misinformation that is provided by an outsourced call center NJBON has contracted because they don’t have the staff to answer all the calls they receive.

To give you an idea of the workload of the NJBON, as of July 21, 2017, there are currently 4,116 nursing candidates backlogged awaiting board action on licensure or certification; 2,838 new graduates or graduate nurses from foreign countries and 1,278 licensees from other states seeking employment. Many of these applicants have been waiting for months, some with job offers pending a New Jersey nursing license.

The longer it takes these new nurses and nurses looking to practice in New Jersey to take the licensure exam, the higher the rate of failure due to lack of practice in the time span from graduation or last practice.

This backlog—because of lack of resources and cooperation—becomes an issue of access to care for patients and restriction of trade for nurses. Nursing is a profession vital in the delivery of health care. Nurses serve in hospitals, clinics, schools, universities, research facilities subacute and long-term care facilities and in agencies serving individuals with disabilities as well as in public health centers. Nurses care for individuals from pre-natal through death. Nurses are caring for patients 24/7-365 days a year.

As the non-union professional association representing the nurses of New Jersey to protect the practice of nursing and patients, the New Jersey State Nurses Association (NJSNA) finds this level of bureaucratic interference appalling. It directly impacts the health care delivery to the state’s nearly 9 million citizens.

Last year revenues from the NJBON were more than $13 million from license fees and other fees.  That is certainly enough to do the work of the NJBON. However, all this revenue has been transferred to the state’s general fund, leaving the NJBON underfunded and unable to properly function.

This is now at crisis level.

When bureaucrats can manipulate the staff operations and funnel the money away from the NJBON thereby driving an ethical Executive Director to resign, there is something wrong. This isn’t about “special interest” pleading. It is the responsibility of the NJBON to protect the people of New Jersey. This is about ensuring a vital nursing workforce to safely serve the citizens of New Jersey.

Watch the full video of a press conference at the Statehouse about the issue on our Facebook page. 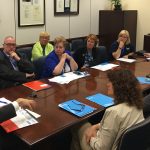 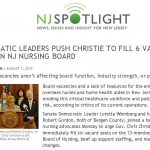