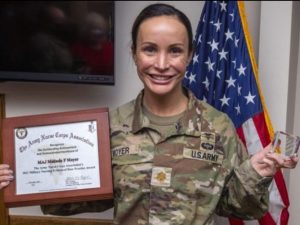 Moyer, the first Army National Guard Soldier to receive the award, was recognized for her participation in a research project in the fight against COVID-19. Moyer is the director of clinical programs at the Joint Surgeons Office, Joint Force Headquarters-Army, and the New Jersey Army National Guard’s first nurse practitioner.

In May 2020, Moyer was placed on COVID response orders.

“I was working at Sea Girt with the joint surgeon’s office,” said Moyer. There she oversaw the safety of more than 1,500 New Jersey National Guard Soldiers and Airmen who had been serving on the frontlines since the beginning days of the pandemic.

When the Soldiers and Airmen were finished, they had to be tested. “Our service members had a real concern about wanting to be tested before coming off mission,” she said. However, no testing program existed. A conference call changed all that.

“I overheard the Connecticut National Guard mentioning a COVID antibody study that they collaborated [on] with Yale University,” said Moyer. “It immediately caught my attention.”

She contacted the Connecticut National Guard, which put her in touch with Yale. New Jersey was added to the project.

“I partnered up with Yale University to conduct the COVID antibody test and offered blood antibody testing to all service members who were on orders at no cost to the New Jersey National Guard or the federal government,” said Moyer. From that point on, it was all up to her.

“I was told I would be taking this on as an independent study,” said Moyer. “From getting the adjutant general’s approval, to sample drop off at the Yale lab, to calling the service members to discuss results.” Soldiers and Airmen started lining up.

“We got them tested for both IGG (Immunoglobulin G) and IGM (Immunoglobulin M) antibodies for COVID, and based on those results, if they were positive, I followed up with them,” said Moyer.

From June 3 to Oct. 17, 2020, she drew 728 blood samples. “It wasn’t hard to get Guard members involved,” said Moyer. “I would take samples at the reverse JRSOI [Joint Reception, Staging, Onward Movement and Integration] when service members were coming off orders. Units then started contacting me directly, and I would travel [to their armory] to get the samples.”

There was some hesitancy with some of the Soldiers and Airmen, but a straightforward explanation cleared that up.

“One of the biggest hurdles I had to overcome with some service members was the distrust on where their information was going and how it was going to be used,” said Moyer. “The study was 100% voluntary, and no information was shared with anyone other than myself and the individual.”

The blood samples from the New Jersey National Guard and other units directly impacted the development of the COVID vaccinations.

“Those antibodies were used to design the COVID vaccines that are in circulation today,” said Moyer.

Her work contributed to the development of the NJNG’s back-to-work plans.

“When looking at best practices for how to allow our Guardsmen to return to duty safely, I was able to advise our leadership using data from our own backyard,” said Moyer. “We looked at how this was affecting the Guard community here.”

“This pandemic affects the population and community differently and is dependent on countless variables,” said Moyer. “The variables used to create the guidelines and practice here was specific to our National Guard community. This is part of what made this study so special and important.” 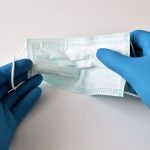 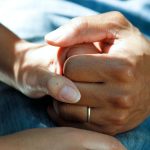