TRENTON, N.J.—July 23, 2019—The prognosis for many New Jersey patients looks brighter since an agreement was signed into law that allows out-of-state nurses to practice in the Garden State, the New Jersey State Nurses Association (NJSNA) said today.

N.J. Governor Phil Murphy signed the enhanced multi-state Nurse Licensure Compact (eNLC) a.k.a. S954 into law on Friday. New Jersey becomes the 34th state to grant nurses permission to practice nursing in any other state that is part of the compact.

“Our health care system received a shot in the arm when New Jersey entered the multi-state compact,” said NJSNA CEO Judy Schmidt, MSN, RN, CCRN. “It will make it easier for more nurses to relocate here and help us with the pending shortage.”

A 2018 U.S. Bureau of Labor Statistics report projected that 1.1 million additional nurses will be needed to avoid further shortages. The American Nurses Association (ANA) reports that there will be more registered nurse jobs available through 2022 than any other profession in the United States.

In addition, New Jersey is projected to have the third worst nursing shortage in the nation by 2030, falling 11,400 nurses short of demand according to RegisteredNursing.org.

The signed bills, S954/A1597, include background checks and fingerprinting, which earlier versions didn’t feature. Regarding quality, nursing programs are accredited nationally by the American Association of Colleges of Nursing, National League for Nursing and the individual state Boards of Nursing.

The multi-state compact is supported by the National Council of State Boards of Nursing.

Schmidt said the compact would also help nurses save time (i.e. in some states it takes about 6-9 months to receive a license after applying) and money (i.e. one N.J. nursing license would provide practice authority in 33 other states).

About NJSNA
NJSNA, which was established in 1901, is a constituent member of the American Nurses Association.  The New Jersey State Nurses Association (NJSNA) represents the interests of 110,000 registered nurses and advanced practice nurses as an advocate for the nursing profession. NJSNA’s lobbying arm continues to protect the nursing profession through legislative victories. Its nonprofit foundation, Institute for Nursing, helps nurses further their careers by providing continuing education, scholarships and research grants in addition to invaluable networking opportunities. For more information, nurses can visit njsna.org or contact NJSNA at njsna@njsna.org or call (609) 883-5335. 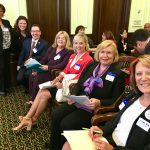